It all started with the eye-shadow. Nina had roped me into a last-minute shopping trip, determined to make an impression at the bachelorette party. While she tried on a dozen different outfits, I inadvertently drifted toward the section of the store that flashed posters of flawless faces and exotic scents.

After three encounters with store clerks trying to thrust boxes and tubes of useless goop into my arms, I grabbed a container of sparkly brown cake to fend them off. Despite that, Nina eventually found me in the clutches of a sales rep trying to convince me that mauve was my colour for all seasons.

Hours later, while we played dress up in her room – I dressed in black, she settled on an olive-green dress that accentuated her curves – she found the shiny bronze that I’d forgotten to fish out at the checkout counter. After heated negotiations, she had me convinced that I was her canvas, and took a paintbrush to my face.

I don’t think it occurred to her how intoxicating it was to feel the heat of her skin against mine. How painfully wonderful it was to watch the curve of her lips as she whistled a quiet tune, how satisfying to hear her throaty giggles at my feeble humour.

For the millionth time, I reminded myself that she was better off not knowing. Especially since she was preoccupied with Murphy. I brushed my feelings aside and spun a tale about my pet hamster to distract myself from my sinking heart.

When she was done with me, I hardly recognized myself in the mirror. We claimed the experiment a success and decided to take a cab to the pub.

After we’d found our friends at a booth and wished the bride-to-be well, we waded towards the bartender, each with a list of half a dozen drinks memorized. Nina caught his attention and we placed our orders, just as I felt a tap on my shoulder.

You look radiant he yelled, over the loud bass engulfing us.

My friend’s extremely talented I replied, taken aback by his candour. We continued to exchange loud banter, before he finally asked me on to the dance floor.

I turned to her for approval, but all I found was my gin and tonic, and her figure dissolving into the crowd.

Where will you go? he croaked, shoulders slumped in defeat.

I’ll stay with Mum for a while I stated, wheeling my suitcase past him and down the hallway. Just as I reached the front door, I felt his fingers wrap around my elbow and cringed inwardly. I slowed to a stop and turned to face him, my knuckles trembling around the handle of my suitcase.

I love you he urged, his blue eyes brimming with emotion.

I tried I whispered, blinking back some of my own.

He faltered, and I slid my arm out of his grip.

I murmured an apology, turned the doorknob and let myself out. I loaded my stuff into my car and took off without a backwards glance.

After I’d put almost twenty miles between myself and the last two years of my life, I pulled into a petrol bunk and sobbed until my eyes ran dry. It broke me that he’d become collateral damage in my journey of self-discovery. To think that Nina was the reason –

I wiped away the tear stains and dove for the glove compartment, heart racing. About six months ago when I’d last seen her, she’d slipped me her current address in writing.

Easier to get rid of, she’d winked, disregarding my phone. Unsure of what she meant, I turned back to the conversation at the table, where we were celebrating the now mom-to-be. When he’d picked me up in my car that night, I’d hastily stashed away the inked napkin, along with the eye-shadow, which I’d reserved for my encounters with Nina, few and far between as they’d been since the beginning of my relationship. It felt wrong – disloyal, even – to parade it around, when it had been the last poignant moment I’d shared with her.

An hour later, I found myself on Nina’s front porch, my stomach in knots. I rang the doorbell, hoping she wouldn’t answer. If she wasn’t home – it’s not as though I knew what I’d say if she were – I could just walk away, take up my mum’s offer to visit, spend time with my nephews. 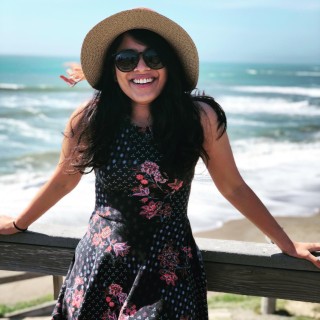 I graduated in 2016 from the University of Michigan, with an M.E in Energy Systems. Microprose is my forte: a form of writing that restricts word counts to as little as 13 words. I currently live in California, pursuing a career in clean energy, whiling away my time before I can become a full-time storyteller. Some of my favourite things are walking on crunchy leaves, the Marvel Cinematic Universe, fluffy puppies, boba tea, murder mysteries and conversing with captivating humans. A wise woman once taught me: to laugh often and much, to win the affection of intelligent people, to appreciate beauty, to find the best in others, to leave the world a bit better-- that is to have succeeded in life.